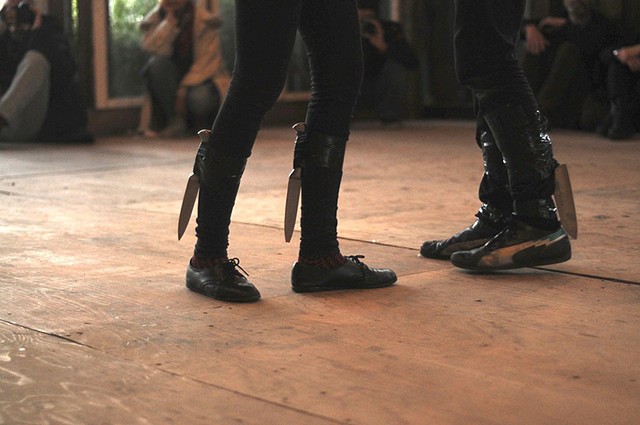 Inspired by the Foraker Act of 1900, which established a primarily U.S.-appointed civilian government in Puerto Rico and outlawed cockfighting; and the Jones-Shafroth Act of 1917, which granted U.S. citizenship to Puerto Ricans (two months before the Selective Service Act of 1917 would allow military conscription to be extended to Puerto Rico, and thus compel them to fight in World War One).

We began the performance by taking turns grooming and arranging each other in ways that resemble the techniques used by modern cockfighters in the Spanish-speaking Caribbean (and the Philippines)--we sponge and trim each other's "plumage", administer a citrous oral rinse, and finally, mimicking the real practice of adding razor sharp spurs to the legs of fighting cocks, we attach one large kitchen knife to the back of each of ours.

After these preparations, we blindfold ourselves, put our backs together, lock arms, and begin a 20 minute, unrehearsed "cockfight", for which the soundtrack is a combination of authentic cockfight sounds from the Caribbean and the October 31, 1950 radio broadcast of a shoot out in Santurce, Puerto Rico between the colonial police and what they believed to be a group of well-armed Nationalists. Actually, the only one in the Salón Boricua, which they assaulted for three hours, was Vidal Santiago, the personal barber of Pedro Albizu Campos--the Nationalist leader they were really after.

You can listen to the audio composition here.

The performance is a condemnation of the long tradition of U.S. "liberation" rhetoric utterly failing to live up to its lofty proclamations. In post-1898 Puerto Rico + Cuba, the U.S. implemented a ruthless program of modernization that along with improved sewage systems, presented these ever-colonized citizens with new, more effective threats to their cultural heritage. As popular dance forms, spiritual beliefs and national pastimes such as cockfighting were being replaced by the "more civilized" and "less barbarous" (read: less African) customs of the North Americans, such as boxing and baseball, Cubans and Puerto Ricans were also being lead into an increasingly more dependent status with the U.S.--making colonial emancipation a tantalizing dream that was deftly stolen away from them by the silver-tongued imperial beast, always speaking softly and concealing a big stick...