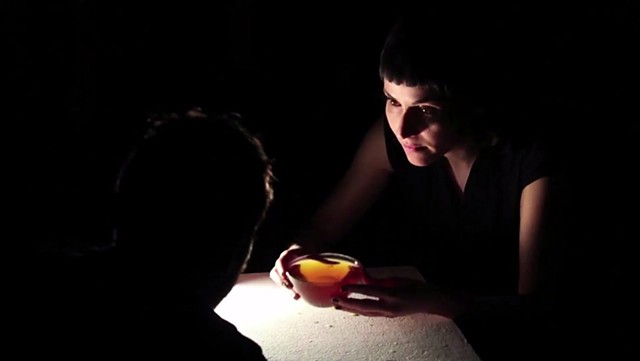 In La Hora de Volver, Indiana appeals to members of the Spanish-speaking diaspora to return to their native homes (whether by plane or homemade raft), like "pumpkin magic", in an effort to rebuild their societies collectively, rather than run away from its many dysfunctions. It is a revolutionary message for a region that continues to be defined by exploitative, colonialist policies and mass emigration.

Our use of honey in this piece is thus, a critical reflection of the fascination and lust exhibited by colonial settlers in their avarice for gold and sugarcane profits, though our treatment of this radiant, golden nectar is also frugal and reverential, referencing the viscid substance's religious uses in pre-Columbian Mesoamerica.

We take turns savoring large amounts of it in our mouths before spitting most of it back into the vessel to be used again...

In the end, it is a celebration of this magnificent ambrish-yellow foodstuff, having seemingly caught the sun in its mucosal membrane. This superior sweetener, which predates sugarcane cultivation in the "Old World" as well as the "New", represents that magical thing for which a return to an ancestral home becomes essential, despite significant social malaise.

"living is like licking honey off a thorn.” — Louis Adamic

“We spectators, voyeurs in this case, were then crowded into the small, dark second room, lit only by a small lamp on a gallery pedestal, lighting the lovely faces of Ian Deleón and Anabel Vázquez, between them a glass bowl of honey and a knife. I doubt that I have ever seen such an eloquently erotic and uncomfortable playfulness. The drinking, spitting out, sharing and returning of the honey between them, the delicate smearing of each other, the scraping away of the honey with the knife, and then the scent of vanilla rum. A duet of eye contact with love and danger, feeling a nearness of blood.” - excerpt from a review of this performance by Philip Kevin Brehse